Parsing HTML Tables in Python with BeautifulSoup and pandas

Something that seems daunting at first when switching from R to Python is replacing all the ready-made functions R has. For example, R has a nice CSV reader out of the box. Python users will eventually find pandas, but what about other R libraries like their HTML Table Reader from the xml package? That’s very helpful for scraping web pages, but in Python it might take a little more work. So in this post, we’re going to write a brief but robust HTML table parser.

Our parser is going to be built on top of the Python package BeautifulSoup. It’s a convenient package and easy to use. Our use will focus on the “find_all” function, but before we start parsing, you need to understand the basics of HTML terminology.

An HTML object consists of a few fundamental pieces: a tag. The format that defines a tag is

and it could have attributes which consistes of a property and a value. A tag we are interested in is the table tag, which defined a table in a website. This table tag has many elements. An element is a component of the page which typically contains content. For a table in HTML, they consist of rows designated by elements within the tr tags, and then column content inside the td tags. A typical example is

It turns out that most sites keep data you’d like to scrape in tables, and so we’re going to learn to parse them.

Parsing a Table in BeautifulSoup

To parse the table, we are going to use the Python library BeautifulSoup. It constructs a tree from the HTML and gives you an API to access different elements of the webpage.

Let’s say we already have our table object returned from BeautifulSoup. To parse the table, we’d like to grab a row, take the data from its columns, and then move on to the next row ad nauseam. In the next bit of code, we define a website that is simply the HTML for a table. We load it into BeautifulSoup and parse it, returning a pandas data frame of the contents.

As you can see, we grab all the tr elements from the table, followed by grabbing the td elements one at a time. We use the “get_text()” method from the td element (called a column in each iteration) and put it into our python object representing a table (it will eventually be a pandas dataframe).

Now, that we have our plan to parse a table, we probably need to figure out how to get to that point. That’s actually easier! We’re going to use the requests package in Python.

So, now we can define our HTML table parser object. You’ll notice we added more bells and whistles to the html table parser. To summarize the functionality outside of basic parsing:

The tuples we return are in the form (table id, parsed table) for every table in the document.

Let’s do an example where we scrape a table from a website. We initialize the parser object and grab the table using our code above:

If you had looked at the URL above, you’d have seen that we were parsing QB stats from the 2015 season off of FantasyPros.com. Our data has been prepared in such a way that we can immediately start an analysis. 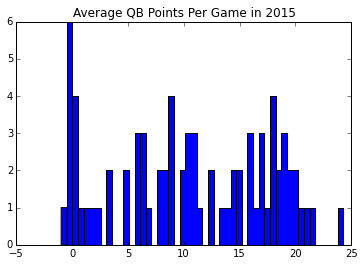 As you can see, this code may find it’s way into some scraper scripts once Football season starts again, but it’s perfectly capable of scraping any page with an HTML table. The code actually will scrape every table on a page, and you can just select the one you want from the resulting list. Happy scraping!