The basic least squares optimization problem is an extremely influencial concept. We are going to trace its roots from the mathematical underpinnings to a Bayesian interpretation. 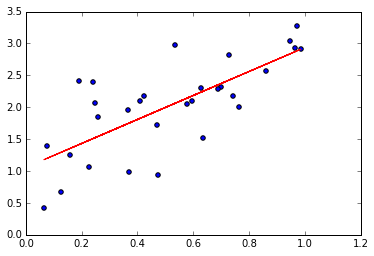 Least squares itself is a simple minimization problem. Given a set of points, find a “best-fit” line in the sense of the Euclidian distance. Due to its limited scope, more analytical machinery has been built around least squares by both the statistical and mathematical communities. While mathematicians have favored regularization methods, the statistical community expanded the concept to a mechanism for prediction/description called linear regression. This method was then expanded upon again by Bayesian statisticians to include “prior” information on the problem at hand.

Bayesian regression used to be very controversial because of the concept of the prior. The prior is a distribution for the parameters of the models (like a standard deviation ) that are unknown a priori. In the example above, a Bayesian would put a “prior” on that would give a distribution for the possible values for . This “subjectivity” upset many statisticians at the time, and the Bayesian approach was shunned from science for decades. Lately, Bayesian statistics has came back into vogue due in part to the Machine Learning community.

Mathematically, it takes a little work to write this down, and to define the problem we need some notation. Let be a vector in and the 2-norm of denoted . For some m by n matrix and vector , the least squares problem is formulated as finding the satisfying \begin{equation} \min_{x} || Ax - y||^2. \end{equation}

Typically, in applications, m is the number of “predictors” and n is the number of data points we have. The m by n data matrix (A) is denoted and the unknown coefficients (x) are denoted . The data points continue to be denoted . Now, the typical solution to this problem the least squares problem is formulated as finding the satisfying \begin{equation} \min_{\beta} | X\beta - y|^2. \end{equation} This is the usual presentation of the problem in the statistics literature.

To get from data to least squares, you must first have data points where and . Arranging the (row vectors) into a matrix gives you the typical representation of the data matrix .

The change from least squares to linear regression is the addition of the data model. A data model is just a probability distribution that is supposed to have generated the data we observed. Statisticians assume a data model to the quanitity they’re interested in predicting, and if the data model “fits” well enough, then they expect reasonable predictions or conclusions (i.e. either the perspectives of predictive or descriptive statistics).

Let’s talk about an example. Let be some quantity we would like to estimate that is based on , our data. We assume the data model for is a normal distribution, that is, where is some function of .

Because they expect the mean to be linear, they model the mean as the dot product for some unknown vector of coefficients . A nice representation is given by writing \begin{equation} y_i \sim N(\mu(x), \sigma) \end{equation} \begin{equation} \mu(x) = \beta \cdot x. \end{equation} Now, interestingly enough, the maximum likelihood estimator of the coefficients is again given by . This is the same solution as in the Least Squares problem. If our data is standardized by column (in each predictor), then is almost the correlation matrix.

To think of why this works, remember that the setting is we have a collection of points and we want to draw a line through them which represents a best-fit. Unless these points are literally in a line, there is going to be some error. Statisticians represent this error in their model via the normal distribution. So, a “model checking” procedure is to verify that “the residuals are normally distributed”. The idea is if our estimate is close enough to the true mean line, then we should see the residuals () approximately normally distributed with 0 mean.

It does make sense that we will “miss” points and so we begin to see the need of clarifying how often and how much we miss such points with the idea of a distribution. Including this error helps the model generalize to new points outside of our data set by giving us a confidence/predictive interval.

Notice, the residuals are approximately normally distributed, which confirms the choice of the data model .

The green lines should give us a 65% confidence interval for new points (due to the rule about the normal distribution and points within one standard deviation), but the issue is our model does not take into account changes in the coefficients. So at this point, the green line can be a useful heuristic, but it is not something that we have strong confidence in.

So far, we have been solving for exactly one function . This process has assumed we know nothing about or , but what if we have some prior information about these variables? This brings us to the Bayesian perspective.

Bayesian inference is based on the concept of the “posterior” distribution. The posterior distribution is proportional to the likelihood of the observed data times the prior distribution assigned, or in symbols, \begin{equation} \text{posterior} \propto \text{(likelihood)} \times \text{(prior)}. \end{equation} In other words, if we give each variable a “best guess” or prior probability distribution, then combined with the data, we can determine the most likely values (i.e. a distribution!) for the parameters. This can be used to improve our confidence/prediction intervals.

Solving this problem will lead to the posterior probability distribution (or pdf) of the prior variables, in particular: \begin{equation} p(\beta_i, \sigma | x, y) \propto p(y | \beta_i, \sigma, x) p(\beta_i)p(\sigma). \end{equation}

Then, we can use the resulting information to make confidence intervals for our predictions because we have a full probability distribution for all the coefficients and the variance! Let’s see it in action.

Above are the probability distributions for , and . Let’s explore how they fit the data. The first thing we need to do is find the maximum a posteriori (MAP). This is the mode of the (joint) posterior distribution (approximately the parameters that give you the highest point for each variable in the images above). This will be used when we plot the data.

Here’s how you would interpret what you see. The red line is the MAP line. The yellow lines are plots of individual realizations of and superimposed on each other, and the green lines are superimposed realizations of . The green region gives you a 65% confidence region for the location of new values of where the yellow region gives you the distribution for the mean (the red line).

Without performing regression multiple times and doing additional statistical tests, you won’t have a confidence interval for the red line, you’ll only have an (incorrect) predictive interval using the red line and the green line (since it will not take into account changes in the coefficients which results in the yellow region).

In this context, the methods are still similar. The true differences appear when you are faced with multiple groups that you are trying to fit data to at the same time. This is when the concept of Bayesian Hierarchical Modeling comes into play.

At this point, it’s clear that both linear regression and Bayesian inference are connected to least squares. It may be less clear how they relate to each other.

If is chosen as the uniform prior (i.e. for all ), then it follows that after a somewhat complicated proof because the prior is improper (doesn’t integrate to 1, or even a finite value).

In my opinion, the maximum likelihood estimator’s interpretation from a Bayesian perspective is more natural: It is the mode of the posterior distribution with a uniform prior. It turns out that selecting a prior is a very powerful tool.