An Annotated Proof of Generative Adversarial Networks with Implementation Notes

The preferred illustration of Generative Adversarial Networks (which seems indoctrinated at this point like Bob, Alice and Eve for cryptography) is the scenario of counterfitting money. The Generator is a counterfits money and the Discriminator is supposed to discriminate between real and fake dollars. As the Generator gets better, the Discriminator has to improve also. This implies a dual training scheme where each model tries to one up the other (i.e. through additional learning). In this post, we will explore the proof from the original paper and demonstrate a typical implementation.

The illustration is only half the battle. In order to prove anything, we need to be able to formally (mathematically) write down the objective. This informs not only the proof strategy but gives one the end goal to “keep an eye out for” while studying the proof.

The goal is that the Generator generates a examples that is indistinguishable from the real data. Mathematically, this is the concept of random variables being equal in distribution (or in law). Another way to say this is that their probability density functions (i.e. the probability measure induced by the random variable on its range) are equal: . This is exactly the strategy of the proof: define an optimization problem where the optimal satisfies . If you knew that your solution satisfies this relationship, then you have a reasonable expectation that you can represent the optimal as a neural network via typical SGD training!

With the counterfitting illustration in mind, the motivation for defining the optimization problem is guided by the following two terms. First, we require that the discriminator recognizes examples from the distribution, hence: \begin{equation} E_{x \sim p_{data}(x)}\log(D(x)) \end{equation} where denotes the expectation. This term comes from the “positive class” of the log-loss function. Maximizing this term corresponds to being able to precisely predict when .

The next term has to do with the Generator tricking the discriminator. In particular, the term comes from the “negative class” of the log-loss function: \begin{equation} E_{z \sim p_{z}(z)}\log(1-D(G(z))). \end{equation} If this value is maximized (remember, the log of is negative), that means and so is NOT tricking .

To combine these two concepts, the Discriminator’s goal is to maximize \begin{equation} E_{x \sim p_{data}(x)}\log(D(x))+E_{z \sim p_{z}(z)}\log(1-D(G(z))) \end{equation} given , which means that properly identifies real and fake data points. The optimal Discriminator in the sense of the above equation for a given will be denoted . Define the value function

Then we can write . Now, ’s aim is the reverse– the optimial minimizes the previous equation when . In the paper, they prefer to write the optimial and to solve the minimax game for the value function

At this point, we must show that this optimization problem has a unique solution and that this solution satisfies .

One big idea from the GAN paper– which is different from other approaches– is that need not be invertible. This is crucial because in practice is NOT invertible. Many pieces of notes online miss this fact when they try to replicate the proof and incorrectly use the change of variables formula from calculus (which would depend on being invertible). Rather, the whole proof relies on this equality:

This equality comes from the Radon-Nikodym Theorem of measure theory. Colloquially, it’s sometimes called the law of the unconscious statistician, which was probably given its name by mathematicians– if I had to guess. This equality shows up in the proof of Proposition 1 in the original GAN paper to little fanfare when they write:

I have seen lecture notes use the change of variables formula for this line! That is incorrect, as to do a change of variables, one must calculate which is not assumed to exist (and in practice for neural networks– does not exist!). I imagine this approach is so common in the machine learning / stats literature that it goes unnamed.

Notice, that this optimal is not practically calculable, but mathematically it is still very important. We do not know a priori and so we would never be able to use it directly during training. On the other hand, its existence enables us to prove that an optimal exists, and during training we only need to approximate this .

Of course, the goal of the GAN process is for . What does this mean for the optimal ? Substituting into the equation for , \begin{equation} D_G^* = \frac{p_{data}}{p_{data}+p_G} = \frac{1}{2}. \end{equation} This means that the Discriminator is completely confused, outputting for examples from both and . Using this idea, the authors exploit this to prove that this is the solution to the minimax game. The theorem is as follows:

“The global minimum of the virtual training criterion is acheived if and only if .”

The second integrand comes from the following trick:

Knowing the is the candidate for the global minimum, I want to stuff that value into the equation, so I add and subtract from each integral, multiplied by the probabiliy densities. This is a common mathematical proof technique which doesn’t change the equality because in essense I am adding 0 to the equation.

The Kullback-Leibler divergence is always non-negative, so we immediately see that is the global minimum of . If we prove only one acheives this, then we are finished because would be the unique point where . To do this, we have to notice a second identity: \begin{equation} C(G) = - \log4 + 2\cdot JSD \big (p_{data} | p_{G}\big ) . \end{equation}

Now, the main thrust of the paper has been proven: namely, that at the optimum of . There is an additional proof in the paper that states given enough training data and the right circumstances, the training process will converge to the optimal . We will omit the details.

Most implementations do not explicitly perform the minimax optimization suggested in the original paper. Instead, they use a more typical training regiment inspired by the paper. For clarity, we will use the concrete case of generating images. First, we define two models. The first is the Discriminator and the second is the Adversarial net . Notice, the adversarial net is also a classifier. In our setting, we will define the positive label 1 to be a real image and 0 to be a fake image. So, training will consist of two steps for each minibatch:

The second step is interesting because it’s very intuitive. We are not updating ’s weights, but we are updating to make the generated images “look more like real images” (i.e. having the Adversarial net output 1 for fake images). If the Adversarial network outputs a 1, that means we have tricked the Discriminator.

For the network itself, I combined my favorite implementations and approaches. It’s sometimes a pain to pick hyperparameters for a network, so it’s always good to have a reference for your first implementation. The Discriminator is a standard Convolutional Neural Network. The Generator is in a sense the reverse of a CNN. We will use transposed convolutional layers to take a dense vector from the latent distribution and upscale/transform those vectors to our desired image shape.

Rather than using Convolution2D and UpSampling2D as some implementations do, you can achieve the same results from using Conv2DTranspose in Keras. There’s deep mathematical reasoning why they are equivalent, but I will leave that for possibly a future post. There’s a page that graphically shows the difference between convolutions and transposed convolutions.

BatchNormalization has become known as another source of regularization, but there is no rigorous proof of this. Like RMSprop, it just appears to work better. BatchNormalization normalizes the output of each layer before passing it through the next layer. This speeds up training and appears to lead to better results. There is no consensus (as of right now) on whether it should be used before or after the activation function, and so I use it before.

Remember to turn off training on the Discriminator’s weights!

Notice you can clearly see the discriminator’s weights are not trainable.

The jury is out on whether or not pretraining the Discriminator is worthwhile. Many recent papers suggest it is not needed. However, this is based on subjectively what Generators predict “more realistic” images. So, I’ll just follow what the original paper did. 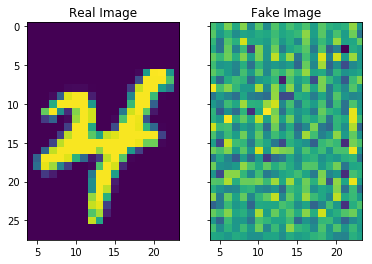 Full Disclosure: I may have ran the code a few times to get a good looking image… 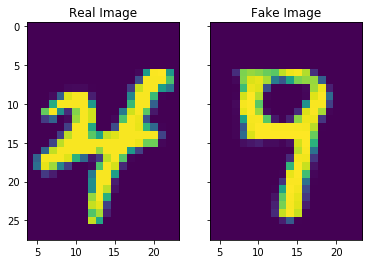 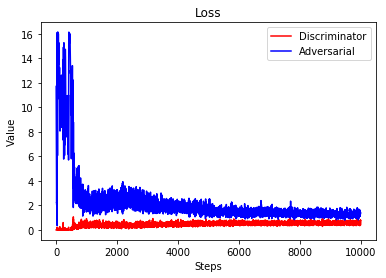